Contents hide
About the Survey
About CSG
Related Posts: 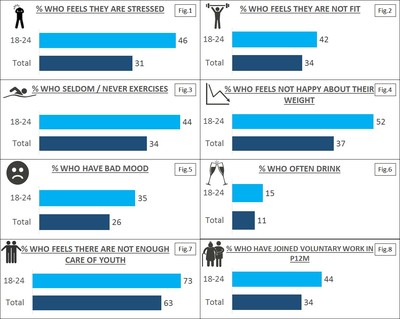 The high stress level has serious impacts on youth’s health, both physically and psychologically.

The lack of exercise among young people has also impact on how they feel about their weight. Over half of young people (52%) reported their weight as “very poor” or “quite poor” (see Fig. 4), compared to only 37% of all adults who are satisfied with their weight.

Other than the physical aspect, it is not surprising to find in the survey that more than one-thirds (35%) of youth claimed that they had “very poor” or “quite poor” mood (see Fig. 5), this is about 10% more than the Hong Kong general population (26%).  This is definitely a concern when one-third of the youth population are suffering from poor psychological health.

In addition, the survey has found that 15% of the Hong Kong youth are drinking “a lot” and “fairly often” (see Fig.6), which is higher than the 11% of the adult population. The government and youth organization need to keep an eye on the drinking problem among youth by providing more information on the effects of drinking.

Given the level of stress that youth is feeling, over two-thirds of Hong Kong youth (73%) agreed that there was not enough care and support to help them (see Fig. 7) which was much higher than the general population of 63% in Hong Kong.

Despite the fact that they did not get enough support, they are still willing to show their care to the society. 44% of them have joined the voluntary work in the past 12 months, significantly higher than the 34% of the general population in Hong Kong (see Fig. 8). The society should pay more attention on the youth, in order to understand their thoughts and difficulties so as to strengthen social harmony.

According to Winnie Poon, Executive Director of CSG HONG KONG, “youths are the pillars of our future, it is worrying to see them suffering from stress and health problems. In order to continue building up prosperity in Hong Kong, it is of the foremost priority for the government and youth organisations to take some effective measures to help them.”

Data were collected online using the CSG Online Panel from a random sample of 500 Hong Kong adults aged 18 years old or above, representative of the Hong Kong population. The survey was launched in October and November 2018.

Since 1982, CSG is one of the leading marketing research firms in Hong Kong and a pioneer in Greater China marketing research.  CSG offers a full range of research methodologies and solutions, including innovative tools like facial coding and eye tracker, to clients in diverse industries.  Through the Win/Gallup International network, CSG provides global marketing research services.  Since 2013, CSG is a member of the INTAGE Group, the leading market research organization in Japan.  For more information, please visit http://www.csg-worldwide.com/.