HONG KONG,  CHINA – Media OutReach – May 22nd, 2019 – The Hong Kong-Zhuhai-Macao Bridge (HZMB) is a 55-kilometre bridge-tunnel system which has brought Macao closer to Hong Kong than ever and enhanced connectivity in the Greater Bay Area. The mega-bridge, which has been opened since October 2018, is the world’s longest sea crossing. The bridge, according to a recent study by CSG Research, attracts high-spending visitors to Macao. On average these visitors spend 32% more in comparison with visitors arriving through sea ports (i.e. Macao and Taipa Ferry Terminals). Shopping is the highest spend sector (+117%), followed by entertainment (+40%).

Contents hide
About the Survey
About CSG
Related Posts:

Due to the easier access brought by the bridge, 78% of visitors arriving via the HZMB would revisit Macao. CSG Research advises the local tourism industry to utilize these insights to forge even better relationships with these valuable guests. Due to CSG’s extensive research of travel behavior in visitors arriving via the HZMB, hotels & resorts can now tailor their marketing efforts towards these high-yield visitors.

How Do They Spend?

During the research period, visitors who travelled to Macao via the HZMB have spent 4,280 Macao Pataca (MOP) per head on average, 32% (MOP 1,038) more than those who arrived through sea ports. In addition, visitors who arrived in Macao via the HZMB spent more than double (117%) on shopping, as well as 40% more on entertainment than those who travelled to Macao through sea ports. (Figure 1)

According to the data from Statistics and Census Services, Macao SAR (DSEC), the total number of people who entered the HZMB daily stands at 15,836, bringing the total number of visitors to 1.46 million in the first quarter, which was 14.1% among all Macao visitors (10.35 million). Those high-spending visitors who travel to Macao via the HZMB could potentially generate MOP 16.4 million in additional revenue.

The study also found that 78% of visitors who travelled via the bridge expressed their intention to visit Macao more frequently while only 32% who travel through sea ports would like to revisit Macao. Moreover, while 37% of visitors who travelled via HZMB stated that they would stay longer in Macao, only 17% of those who entered Macao through sea ports stated the same intention. Visitors who would revisit Macao and who would stay longer on their trip provide a huge potential for an increased revenue for local tourism, especially for hotels, food and beverage, shopping and entertainment industries (Figure 4 & 5).

The study also researched visitors and their satisfaction with the following 8 resorts in Macao:

Local tourism could utilize these study results to increase visitor engagement and loyalty by tailoring their offerings to the findings.

Visitors who entered Macao via HZMB also traveled in larger groups, the study reveals. An average group size of 2.6 persons was recorded, much larger than the 2.2 persons per group of those arriving through sea ports. Furthermore, 38% of visitors who travelled via the bridge entered Macao in groups of 3 persons or more, compared with only 24% of those who travelled through sea ports (Figure 3).

Derek Yu, Research Director of CSG, commented, “The HZMB is yet to function to its full capacity, as it is presently limited to licensed vehicles only. But official data has already shown that visitors’ numbers surged with 21% yearly in the first quarter of 2019. From our study, it is estimated that the potential contribution of the bridge to the Macao economy is MOP 16.4 million per day. Therefore, it is meaningful to study travel behavior of visitors arriving via the bridge and continuously monitor the impact of the HZMB on Macao. The increasing importance for these high value visitors to shop and enjoy entertainment provides opportunities for Macao to establish itself as a destination which offers the best entertainment and world class shopping.”

Derek summarizes the benefits of the HZMB to Macao as follows: 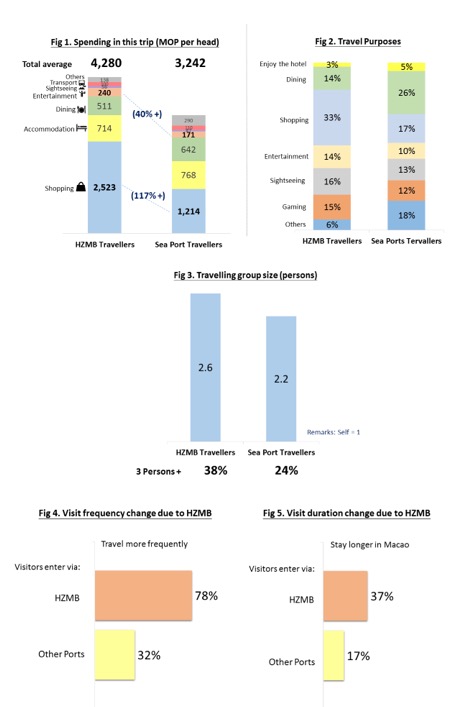 The survey was initiated by CSG. The research study aimed at studying Macao visitors’ travel behaviors and their views to eight integrated resorts in Macao.

CSG is one of the leading marketing research firms established in Hong Kong in 1982 offering comprehensive research services to clients in diverse industries. CSG is a marketing research pioneer in Greater China. The company has further expanded from providing regional to global marketing research services through its connection with the Win/Gallup International Network. CSG offers a full range of research methodologies and solutions, including innovative tools like facial coding and eye tracking. In 2013, CSG became a member of the INTAGE Group, which is the leading market research organization in Japan. For more information, please visit https://www.csg-worldwide.com/.