SEOUL, KOREA – Media OutReach – 16 May 2019 – Twitter and KCON today announce their first-ever partnership to provide KPop fans across the world with exclusive KCON content and highlights via the global social networking platform. Kicking off the partnership is KCON 2019 Japan (@KCONJAPAN), which will take place from 17 to 19 May 2019, at the Makuhari Messe International Exhibition Hall in Japan. 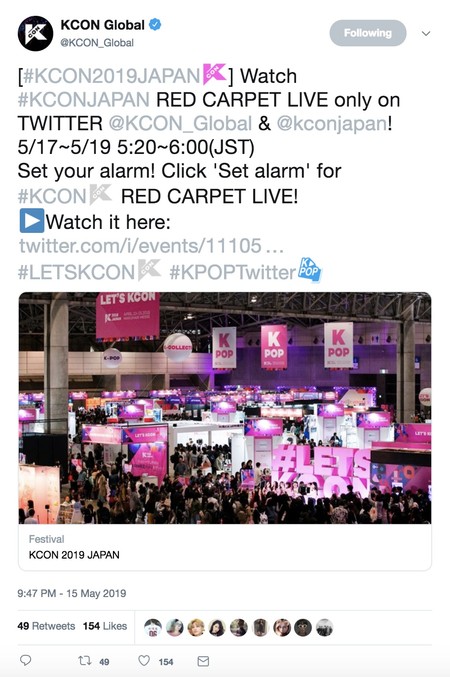 KCON is the world’s largest K-culture festival. Hosted by CJ ENM, the first global convergent content and commerce company in Korea, the festival spans multiple markets around the world and is tailored to regional characteristics. Since its inception, KCON has grown from strength to strength, with the number of cumulative audiences around the globe about to surpass 1 million.

KPop fans around the world will get a close-up look at the KCON 2019 Japan Red Carpet event through an exclusive live stream by Twitter, which will take place at a special event page from 5:20pm to 6:00pm JST on 17 May 2019. Fans will be able to set up a Tweet reminder for the event to avoid missing any of the action.

Extending the experience is Twitter 360, which will offer up a 360-degree view of the star-studded event, as KPop artists and Korean celebrities take to the red carpet. Other highlights include performance and backstage footage.

To commemorate the partnership with KCON, as well as make it easier for fans at the event and around the world to follow and join conversations, Twitter also launched a special emoji. Tweeting #KCON, #KCON2019, #KCON2019JAPAN, #KCON2019USA, #KCON2019Thailand and #LETSKCON will generate the distinctive KCON official logo.

YeonJeong Kim, Head of Global Content Partnerships at Twitter Korea, said, “This partnership with KCON widens opportunities to deliver Korean culture content, including K-dramas, K-beauty, K-food, and KPop, to fans on Twitter around the world.” She added, “Over the years, Twitter has partnered with various KPop festivals to bring Korean culture to the world, including the Mnet Asian Music Awards (MAMA) and Soompi Awards. We’re excited to continue expanding the content partnership centered on KPop events, as well as continue to bring exclusive and live content to users across the globe.”

See the best of KCON (@KCON_global) in 2019 via Twitter. The events will take place in:

Twitter is what’s happening in the world and what people are talking about right now. From breaking news and entertainment to sports, politics, and everyday interests, see every side of the story. Join the open conversation. Watch live streaming events. Available in more than 40 languages around the world, the service can be accessed via twitter.com, Twitter Lite (mobile.twitter.com), an array of mobile devices, and SMS. For more information, please visit about.twitter.com, follow @TwitterSG, and download both the Twitter and Periscope apps at twitter.com/download and periscope.tv.