SEOUL, KOREA – Media OutReach – 31 May 2019 – Twitter is the place to see what’s happening and join in the global conversations related to KPop. It was no different for the 14th Annual Soompi Awards (#SoompiAwards), as KPop fans kept themselves updated through a flurry of Tweets expressing their love for their favourite artistes and idols. In an incredible feat, Kpop fans worldwide have set a new #KPopTwitter record with over 95 million #TwitterBestFandom Tweets over two separate 24-hour voting periods, more than double from 2018! The #TwitterBestFandom category is the only Soompi Awards this year to be voted on social media, held exclusively on Twitter. See the global heatmap below for the worldwide #TwitterBestFandom conversation on Twitter this year.

In a fresh turn of events,  #TeamEXO (@weareoneEXO) emerged as the new winner for the #TwitterBestFandom category as they received the most vote Tweets this year! This is the first time that EXO has won this annual popularity award, showcasing the power of their global fan base on Twitter. 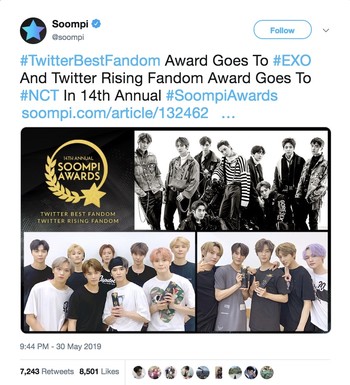 In addition, #TeamNCT (@NCTsmtown) received the distinction of being the first KPop group to receive the brand new Twitter Rising Fandom Achievement, having seen their total vote Tweets increase by over 5,000% since 2018! This distinction recognises the KPop fandom that has grown the most on Twitter by comparing the total vote Tweets for each KPop artist this year to the total vote Tweets for each KPop artist last year. 2018 has indeed been a breakthrough year for NCT, and the growing number of NCTzens responded by showering them with love through their Tweets. 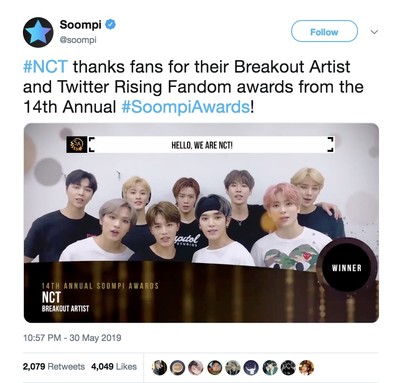 Here are the top and fastest-rising Twitter KPop Fandoms based on the volume and growth of #TwitterBestFandom Tweets during the 14th annual Soompi Awards:

With Twitter as the only social media platform to be used to vote for this year’s #SoompiAwards, we have seen fandoms going beyond to express their support for their beloved idols. Conversations also took place, as fans discussed hot favourites to win the Twitter awards. Here are some top fan Tweets:

Want to join in on the hottest conversations about KPop and Korean entertainment? Follow @soompi and use the #KPopTwitter hashtag on Twitter for real-time updates on your favourite KPop artists!

Twitter, Inc. (NYSE: TWTR) is what’s happening in the world and what people are talking about right now. On Twitter, live comes to life as conversations unfold, showing you all sides of the story. From breaking news and entertainment to sports, politics and everyday interests, when things happen in the world, they happen first on Twitter. Twitter is available in more than 40 languages around the world. The service can be accessed at  twitter.com, on a variety of mobile devices and via SMS. For more information, visit about.twitter.com or follow  @TwitterKorea. For information on how to download the Twitter and Periscope apps, visit  twitter.com/download  and periscope.tv.

Soompi, the publishing division of  Rakuten Viki, is the leader in online communities, news, music and more for K-pop and K-entertainment. Rakuten Viki is a global streaming destination for Asian entertainment, where millions of people watch their favorite TV shows, movies, original Viki productions, as well as curated lifestyle clips and influencer videos — translated into 200+ languages by a community of avid fans. Together, we’re breaking down barriers that stand between great entertainment and its fans, no matter where they are.