CHANGSHA, CHINA – Media OutReach – 15 July 2019 – Since the establishment of Changsha IFS , it has brought a series of cultural, artistic and trendy activities to Changsha and Central China, enriching the city’s urban entertainment lifestyle and bringing the world’s most cutting-edge trends to its residents. As a trendsetting art leader in Central China, Changsha  IFS will continue to lead the trend this summer. Together with Sesame Street, IFS is bringing the hottest street culture festival to Changsha.

The 50th anniversary of Sesame Street in Changsha

New trends in the classics

“Sesame Street” was first broadcast on the National Education TV Station in 1969, November 10 and has been accompanying generations of children for 50 years. In recent years, Sesame Street has also achieved cross-border cooperation with major brands. With the cartoon image that is deeply rooted in the hearts of many, it has become an element of design that global trends are competing for.

As the trendsetting artist in Central China, Changsha IFS, on July 3, is officially launching the “Summer Star Surge” series of activities with Sesame Street to ignite the summer. “A Walk Down Sesame Street”, a limited edition of Sesame Street Street View that is exclusive only to Changsha, carries the theme of street trend elements. It will present a new perspective of the classics, which held an image that is deeply rooted in the hearts of many.

The street view restored the street scene in Sesame Street to a large extent, and the cross-border interpretation of trend elements such as Sesame Street and graffiti will bring out a new spark. In addition to Big Bird, Elmo, Cookie Monster, you can also catch a glimpse of the upcoming Sesame Street limited edition items by Stayreal.  Throughout the summer, the latest limited editions of the trendiest brands such as EVISU, DICKIES, INXX, New Balance etc. will be unveiled here.

The ignition of “Summer Star Surge”

As the sacred place of the city’s trend culture, Changsha IFS is teaming up with the world’s 50-year-old Sesame Street, Hong Kong God-class sneaker collector Horace Leung, internationally renowned Asian graffiti team ABS CREW, and a group of trend performers, to present an audio-visual feast of street fashion culture. Cai Ningling, director and general manager of Changsha IFS, will start the festival with the first rhythm of the “Summer Star Surge”, indicating the official opening of the Changsha IFS summer event. 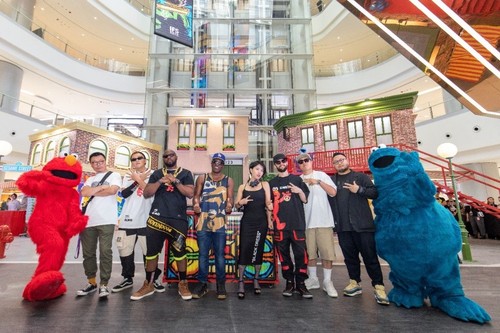 In the L7 sculpture garden of Changsha IFS, ABS CREW and hundreds of graffiti lovers have jointly created a star tide graffiti wall, a limited edition that combines elements of Changsha and Sesame Street. This is once again another iconic spot for visitors to take photographs.

At the “Summer Star Surge” event, Hong Kong God-class sneaker collector Horace Leung   will be present to showcase his hall-level collection to the fans of basketball shoes.  For this event, Horace is bringing the 1984 NIKE basketball shoes worn by MICHAEL JORDAN before AIR JORDAN I, as well as the 2002 Adidas PROMODEL and other collections of shoes worn by LEBRON JAMES in high school. Every pair is a hall-level collection, only heard of but hardly ever seen in public.