HONG KONG, CHINA – Media OutReach – 24 May 2019 – Abstract: Johnson Zhao, founder of Wall Street Finance, has created a 100% reserved stablecoin DUSD for the layout of digital finance track. Its unique algorithm and consensus mechanism can ensure stable currency prices. Recently, it has been exclusively named as the Hong Kong Station of the 2019 FINWISE Summit.

The 2019 FINWISE Summit and the Global Science, Technology and Finance Summit Forum will be grandly opened in Hong Kong on May 28.The summit has been named exclusively by the New York Digital USD Stablecoin DUSD (www.DUSD.com).The new generation of US USD stablecoin DUSD will join FINWISE Summit, at the same time, hundreds of thousands of people will pay close attention to this grand ceremony jointly presented by DUSD and FINWISE. 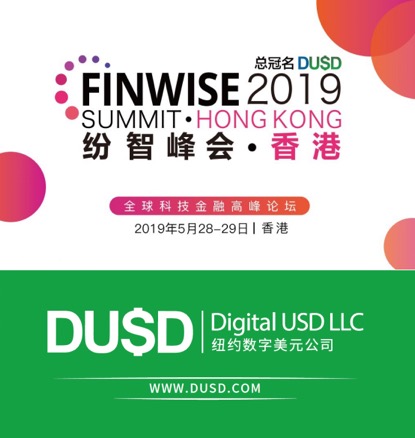 DUSD began on Wall Street, connecting the world and competing for world-class digital USD in the global war of stablecoin.

DUSD was officially launched in November 2018, and is currently landing on dozens of exchanges in succession.

DUSD, as its exclusive strategic cooperation unit, attracted wide attention at the 2009 Global Block Chain (Hangzhou) Summit Forum held by 8bit on May 17. On the day of the summit,Johnson Zhao, founder of DUSD, was invited to attend and deliver the keynote speech “From Bitcoin to Facebook Coin – the Next Decade of Block Chain”. He strongly believed that the stablecoin would become the core fuel and infrastructure of Block Chain 2.0, which was highly praised.

After three years of intensive development, the DUSD’s exclusive FINWISE Summit, has become the most influential block chain summit in the industry. It has successfully held two successive sessions in Shanghai and Macao. It has become a super-first-class large-scale block chain summit with thousands of guests and millions of influential audiences, and enjoys a good reputation both at home and abroad.

In the Hong Kong Station of the 2009 FINWISE Summit, a special “FINWISE Golden Globe Award” was set up for vote selection of the outstanding leaders of international technology and finance enterprises, institutions and block chains with on-site awards. Johnson Zhao, founder of DUSD, will give a keynote speech at the summit and act as a guest of honor at the banquet to participate in the ceremony which is expected by all.

DUSD is the best choice for stablecoin

DUSD is managed by a third-party Citibank. It operates in compliance with the rules. It executes transactions under intelligent contracts. The trusteeship and allocation of funds are not controlled by DUSD and will never misappropriate customers’ funds. At the same time, the rights and interests of DUSD fund trustees and money holders are legally protected.

Digital USD, LLC, an entity that manages DUSD, has been successfully registered with the New York Government in September 2018. It provides monetary services in compliance with the regulations. It protects against fraud, money laundering and DUSD holders through a strong anti-money laundering (AML) compliance program.

DUSD account fund holdings are open, and the third-party professional agency PWC is entrusted with monthly audit to ensure that DUSD is anchored with US dollar 1:1 in the current custody account and 100% provision. When the audit report is released, users can check whether the balance of DUSD accounts exceeds the US dollar balance at the DUSD smart contract address.

It is reported that DUSD has joined forces with WBFex, ZG.TOP, BIONE, ONEROOT and other exchanges. In the future, DUSD will have a complete ecological layout and other multi-domain solutions.DUSD’s major actions in the public blockchain layout include the introduction of stablecoin based on EOS, wave field, everiToken and other public blockchain platforms.