HONG KONG, CHINA – Media OutReach – 21 June 2019 – The 2-day HSBC Primary School Touch Tournament 2019 drew to a close at King’s Park Sports Ground earlier today.  More than 1,300 students from 46 primary schools, of which 24 have participated in the HSBC Try Rugby programme, played a role in the tournament and enjoyed playing touch rugby in a competitive capacity.

HSBC joined forces with the Hong Kong Rugby Union (HKRU) to facilitate the “HSBC Primary School Touch Tournament”, in support of the HSBC Try Rugby Programme. With the support of HSBC, twice as many schools and teams participated in the event this year.

Hong Kong National Rugby Team players Stephanie Chan and Josh Dowsing joined in proceedings and and were on hand to share their rugby skills and techniques with local primary school students on the pitch.

As  a proud sponsor of the HSBC World Rugby Sevens Series, the Cathay Pacific/HSBC Hong Kong Sevens and the Hong Kong National Men and Women’s teams, HSBC holds firm in the belief of the power of sport as a force for good, and remains firmly committed to further developing the sport in Hong Kong by providing the resources and education to school teachers and their students.

HSBC’s grassroots, community programmes are noticeably accelerating the development of the next generation of exciting rugby talent, ensuring the sport is set to prosper for years to come. The HSBC Try Rugby programme in partnership with the Hong Kong Rugby Union (HKRU) and The Education University of Hong Kong (EdUHK) is a prime example that has paved the way for other HSBC initiatives around the world and has seen over 30,000 children pick up a rugby ball for the first time. This number is set to grow as the partnership progresses through its third year.

HSBC launched its Try Rugby community Programme in February 2017 in partnership with the Hong Kong Rugby Union (HKRU) and The Education University of Hong Kong (EdUHK). The premise of the initiative is to provide primary schools with the education, skills and equipment to grow the rugby game from grassroots through to elite level, spreading the knowledge and skills nurtured in the game of rugby. It is now in its third year following a successful two years, whereby over 30,000 students have had the opportunity to learn the basics of rugby through the programme. 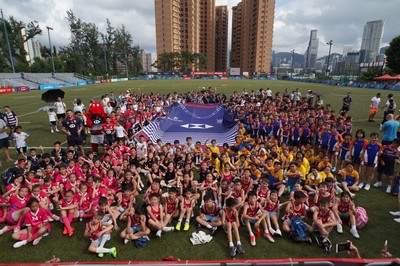 The Hongkong and Shanghai Banking Corporation Limited is the founding member of the HSBC Group, which serves our customers through four global businesses: Retail Banking and Wealth Management, Commercial Banking, Global Banking and Markets, and Global Private Banking. The Group serves customers worldwide in 66 countries and territories in our geographical regions: Europe, Asia, North America, Latin America, and Middle East and North Africa. With assets of $2,558bn at 31 December 2018, HSBC is one of the world’s largest banking and financial services organisations.