BONN, GERMANY – Media OutReach – 3 April 2019 – On the night of March 14th to 15th, cyclone Idai made landfall in Mozambique and neighboring countries Zimbabwe and Malawi. A series of storm surges and massive flooding followed, causing widespread damage and destruction. In Mozambique hundreds of thousands of people are said to be homeless, electricity supply is sporadic and large swathes of the country are cut off from the outside world. Current reports say there are 550 casualties, but estimates point to as many as one thousand. The Mozambique government has declared a state of emergency. Extensive damage to infrastructure such as communications systems, electricity supply and roads is making it extremely difficult to provide humanitarian help and logistics. Deutsche Post DHL Group has deployed its Disaster Response Team (DRT) to provide assistance at the local airport in Beira. The DRT advises airport personnel and coordinates incoming humanitarian aid for non-governmental organizations (NGOs). This first DRT deployment to Africa is headed by Chris Weeks, Director for Humanitarian Affairs at Deutsche Post DHL Group. He is accompanied by a team of DHL volunteers from the United Arab Emirates, Mozambique and South Africa. 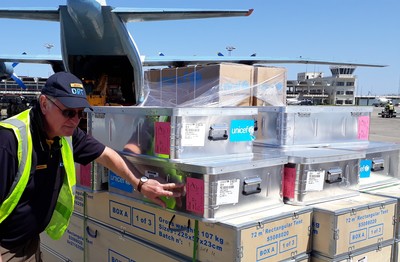 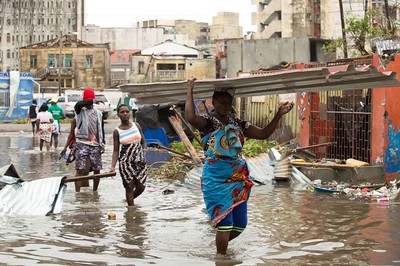 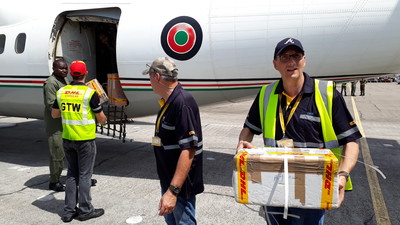 The United Nations and other humanitarian organizations have also deployed staff to Beira. Many of the helpers are still at the airport and are organizing safe options for onward transport. “There isn’t much aid coming in right now,” Chris Weeks explains, “but we expect that to change as the UN has allocated USD 20 million to provide humanitarian help.” The Disaster Response Team is cooperating closely with national and international humanitarian aid organizations, and with the responsible airport personnel to provide logistical support. “In the wake of a natural disaster, logistical coordination of relief supplies is crucial,” says Weeks. “As logistics specialists with vast experience in disaster management, our skills and expertise can help save lives. We help airport personnel to process relief supplies quickly so that they reach the victims of the cyclone in the fastest possible time.”

“We have been here since the start of the week. One and a half weeks after the disaster, conditions in this part of Mozambique remain critical. The rain hasn’t let up, the floodwater can’t drain away and the river continues to rise,” says Weeks. “Right now, the airport in Beira is one of the few places in the city that is dry and has functioning infrastructure.” The airport is currently receiving most of the incoming aid such as water, food, tents, fuel, medical supplies and technical equipment. These are sorted and distributed in Beira as well as in rural areas and other places affected by the cyclone.

“It’s hard to estimate the full extent of the damage and destruction caused. We’ll no doubt see follow-on effects over the next few days — such as outbreaks of diseases like malaria, which is fostered by stagnant water and increases the need for medical supplies. Our team is standing by to help,” says Weeks.

About the Disaster Response Team

The DRTs are part of DPDHL Group’s GoHelp disaster management program, which it has operated in partnership with the United Nations (UN) since 2005. Through this partnership, the Group provides the UN and national disaster management agencies with pro bono access to its core logistics expertise, and the logistics skills of more than 500 specially-trained employee volunteers worldwide who can deploy within 72 hours after a natural disaster.

Since the partnership was launched, the DRTs have completed more than 40 deployments for different natural disasters in over 20 countries — most recently the team helped the victims of the earthquake and tsunami in Palu, Indonesia in October 2018.

In addition to the DRT deployments, the Group’s Get Airports Ready for Disaster (GARD) initiative — also part of the GoHelp program — trains airport management in high-risk regions to be better prepared should disaster strike.

You can find the press release for download as well as further information on dpdhl.com/pressreleases

You can read more about our CR activities in our latest CR Report .