First contract for 2 vehicles for the Port of Abidjan 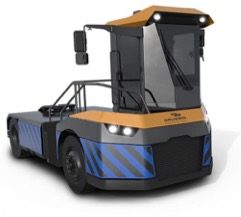 This framework contract is the outcome of the contract signed between Gaussin and Bolloré Ports in February 2018 (cf. press release dated 19 February 2018) on the co-development of the APM 75T. The vehicle has been designed to take account of the specific techniques used by BOLLORE PORTS in the ports it operates. At the same time Gaussin signed a second contract with Blue Solutions with a view to integrating Blue Solutions LMP® Powerpack into Gaussin vehicles. The APM 75T will therefore be equipped with the  LMP® Powerpack.

The framework contract has already led to a 1st order for 2 APM 75T HE vehicles for the port of Abidjan in Côte d’Ivoire, which is operated by Bolloré Ports.

The APM 75T HE will be officially presented to the market at the TOC Europe-Rotterdam trade fair in June 2019.

Bolloré Ports, a leader in Africa

Bolloré Ports is the no. 1 port infrastructure operator in Africa and a leading manager of container terminals on this continent.

Bolloré Ports operates 21 container terminals around the world and has plans for 3 new concessions in Asia and Africa.

Every year Bolloré Ports invests some €250m in the construction and development of the port infrastructures entrusted to it to meet the requirement of its clients, ship owners, importers and exporters.

Situated at the heart of an economic zone serving a population of 320 million, Côte d’Ivoire is the economic powerhouse of West Africa. With its ideal location in the Gulf of Guinea, Abidjan Terminal TC1 is one of the busiest in Africa. And with its integrated logistics platform, it is a model of innovation on the continent.

Since 2004, a programme has been underway to modernise the container terminal in order to anticipate the productivity needs generated by the country’s growing economy.

Gaussin Manugistique® is specialised in the auditing of handling processes and the development of wheeled handling systems used to place and transport heavy, bulky or fragile loads. With more than 50,000 vehicles worldwide, GAUSSIN Manugistique boasts a strong reputation in four fast-expanding markets: Energy, Transport, the Environment, and Raw Materials. Gaussin Manugistique® has been listed on Euronext Growth in Paris since 16 June 2010. Gaussin shares have been listed in the E2 trading group (public offering) since 20 July 2012, after AMF approval 12-360 was secured on 17/07/12 for the prospectus, available free of charge from www.gaussin.com.